The Western Slope Division is developing a Bailey Bridge system made from 3d printed parts. It is designed at 1/16th scale , and while it is true to the original overall dimensions, some minor changes were needed to accommodate the scale 3d printing process. Just like the real ones, this bridge system can be deployed in a number of configurations, and it can be disassembled and stored until needed. All the parts can be transported in a 1/16th scale CCKW.

These pictures are of the prototype being tested. Early engineering tests imply that a long span bridge using this system is capable of holding a 1/16th scale RC tank without any problems.

The bridge is 6 sections long now, and has been set up in Tankland.

Posted on December 9, 2020 by g hunter
Posted in Uncategorized | Leave a comment

Not quite done, but now it’s running… 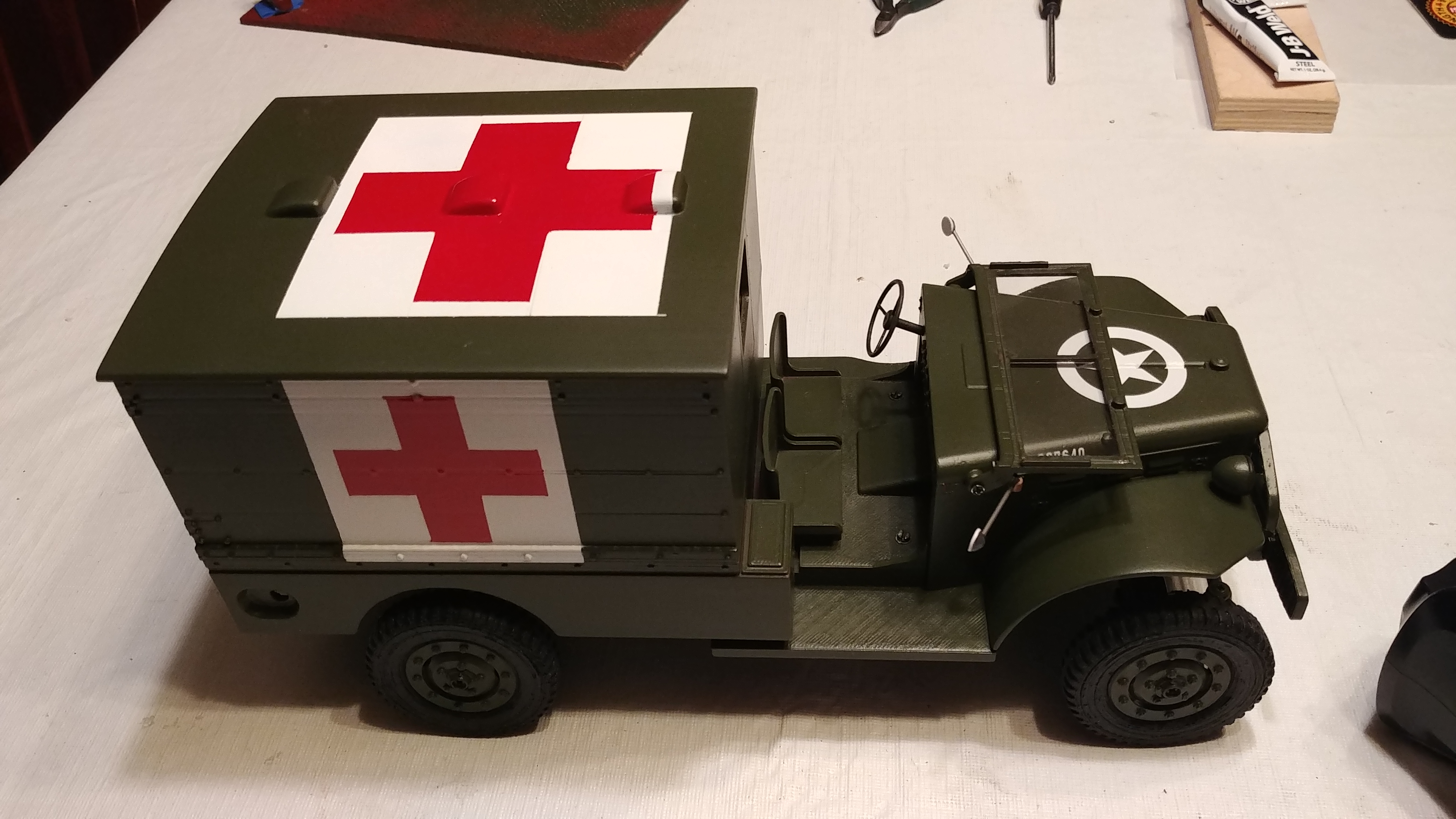 More pix and info to come.

A movie of the Abrams in soft sand.

Click the link below to watch the CCKW pull a trailer off road.

CCKW SNOW TEST, WITH AND WITHOUT TRAILER

Both the 3d printed CCKW trucks are built and ready for their RC gear.  One has been shipped back to Detroit to the friend who printed them, and the Western Slope Division gets to keep one.  This is the one that went to Detroit. 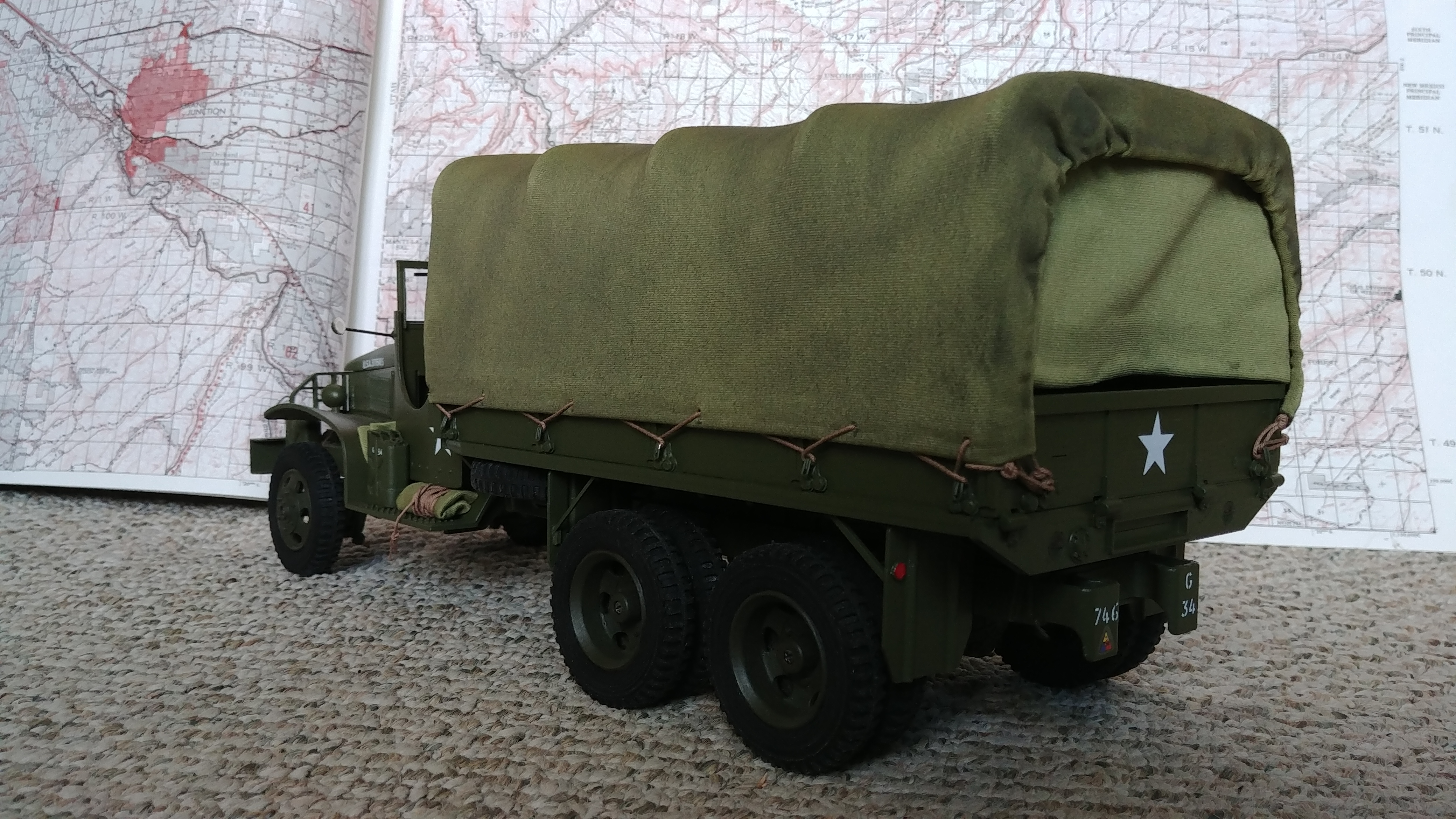 This is the one that stays in Colorado. 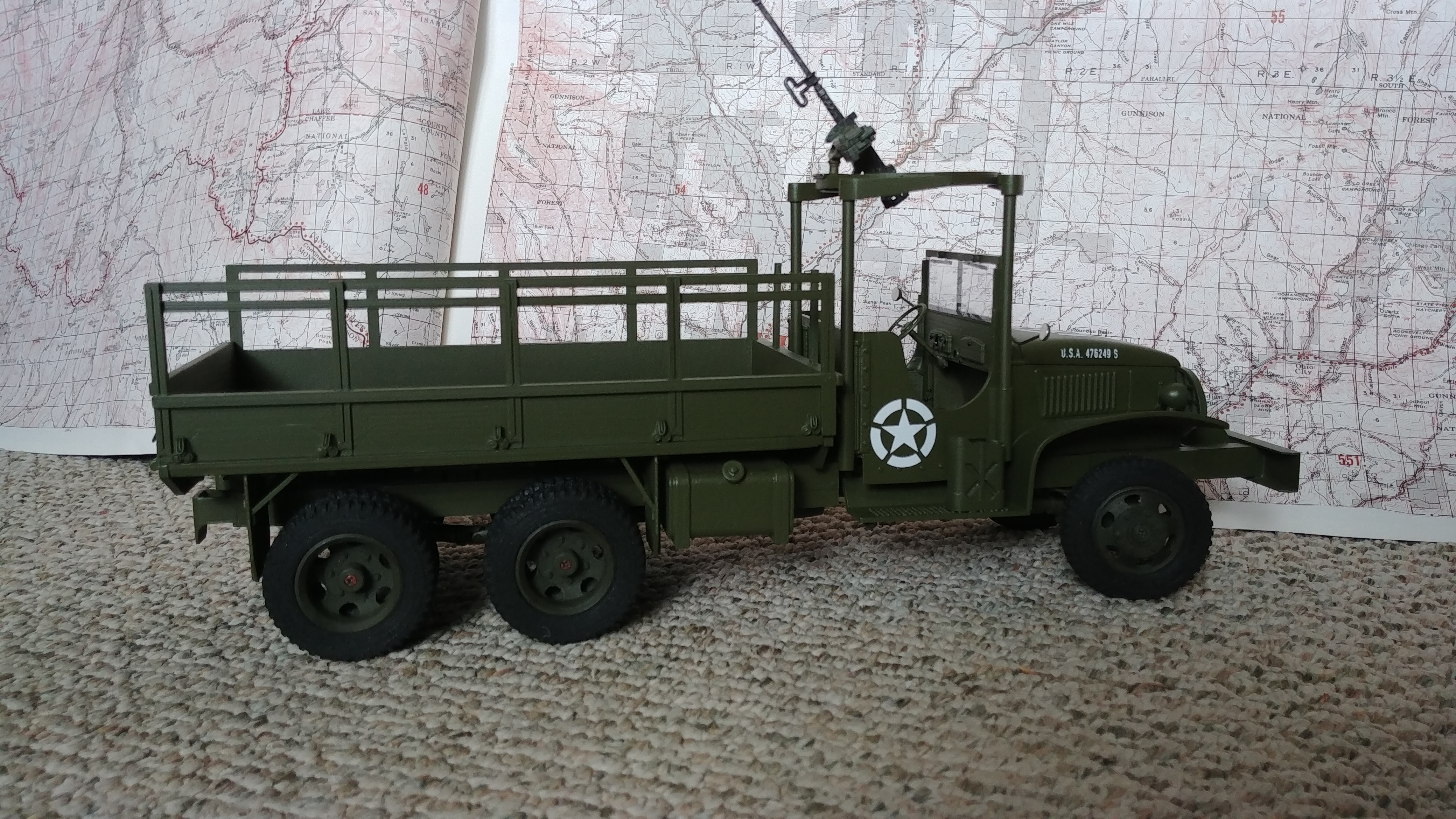 This is a link to a movie of it running.

Another fine book in the Pen and Sword Images of War series is:

SS PANZER DIVISIONS ON THE EASTERN FRONT by Bob Carruthers.

This book is chock full of striking photographs taken throughout the war, from the invasion of Poland, to the last battles in Hungary.  Most are candid shots, often in the heat of battle, and they clearly show the daily life of the SS soldiers.  While I can never condone the ideology of the SS soldiers, this book plainly shows that they often fought bravely against overwhelming odds, and that they gave their lives in overwhelming numbers compared to their brothers serving in the army.

Another striking aspect of the pictures in this book is the sheer volume of photos to browse.  Page after page of photos carried me through the war, from the farms of Poland, to the steppes of the USSR, and back to Germany.  The pictures also show how the SS enjoyed far better equipment and weapons than their brothers in the army.  Indeed, any study of World War Two German equipment that did not include the SS panzer divisions, would miss all the best stuff.  For modelers and history buffs alike, this book is a treasure.

The Western Slope Division is building two RC World War Two CCKW 2 1/2 ton trucks from 3D printed parts.  There are no instructions, so the build has been slow, with lots of dry fitting of parts before gluing.   They are not done yet, but here are a few pictures.

The 3D design is by a guy in the UK named Martin, thank you Martin for producing this nice model.

The 3D printing is by a guy in the USA named Gary.  Thank you Gary for including me in your project.  This has been fun.

One truck will stay with the Western Slope Division, and one will be shipped back east to support Gary’s task force. 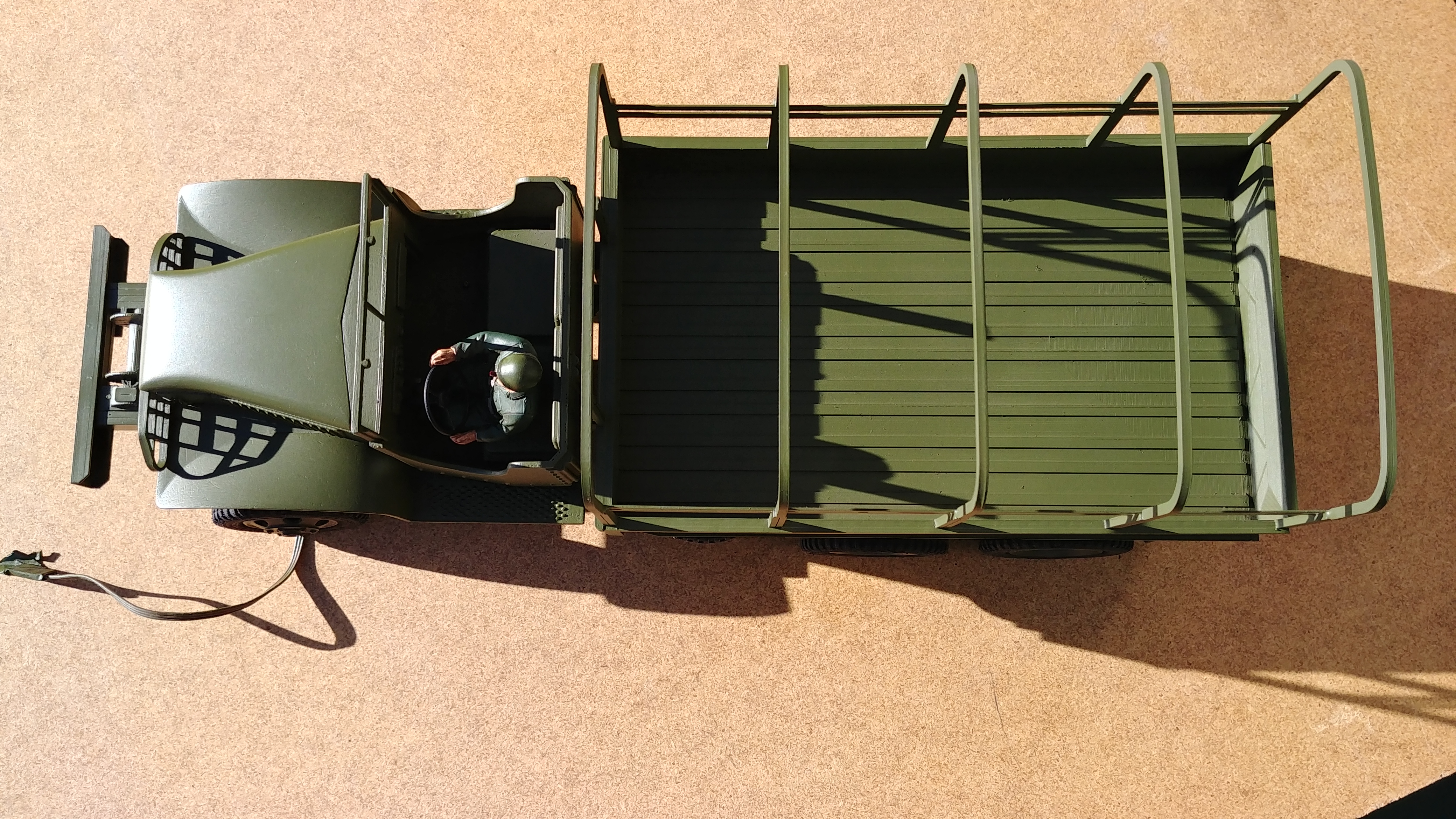 Having air support is critical to success.

We did some redneck work on the two 4×4 trucks, now we have one working 6×6 and a trailer.  It’s not done yet, the rubber band is holding it together, but it has been a fun bash together so far. 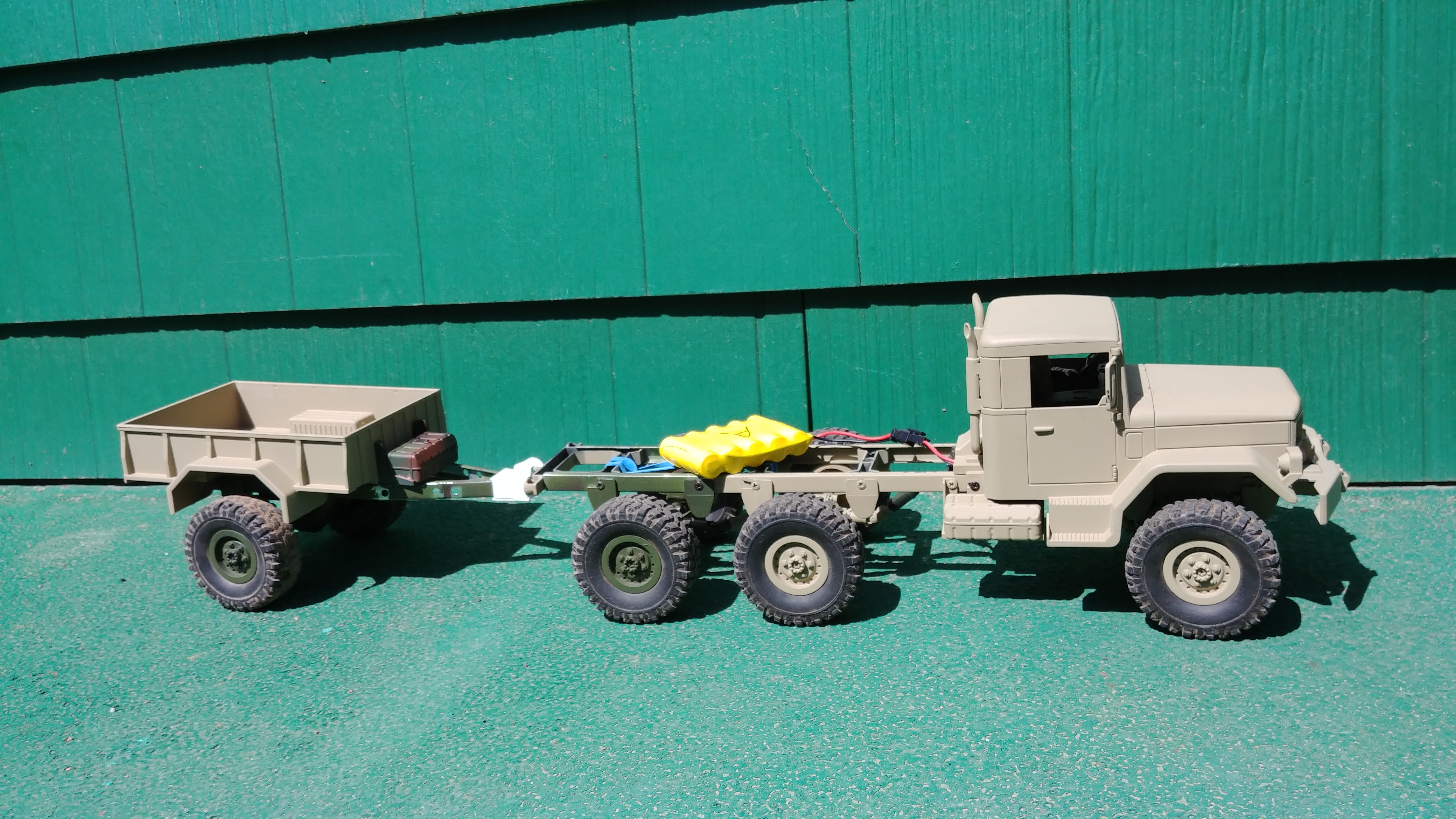 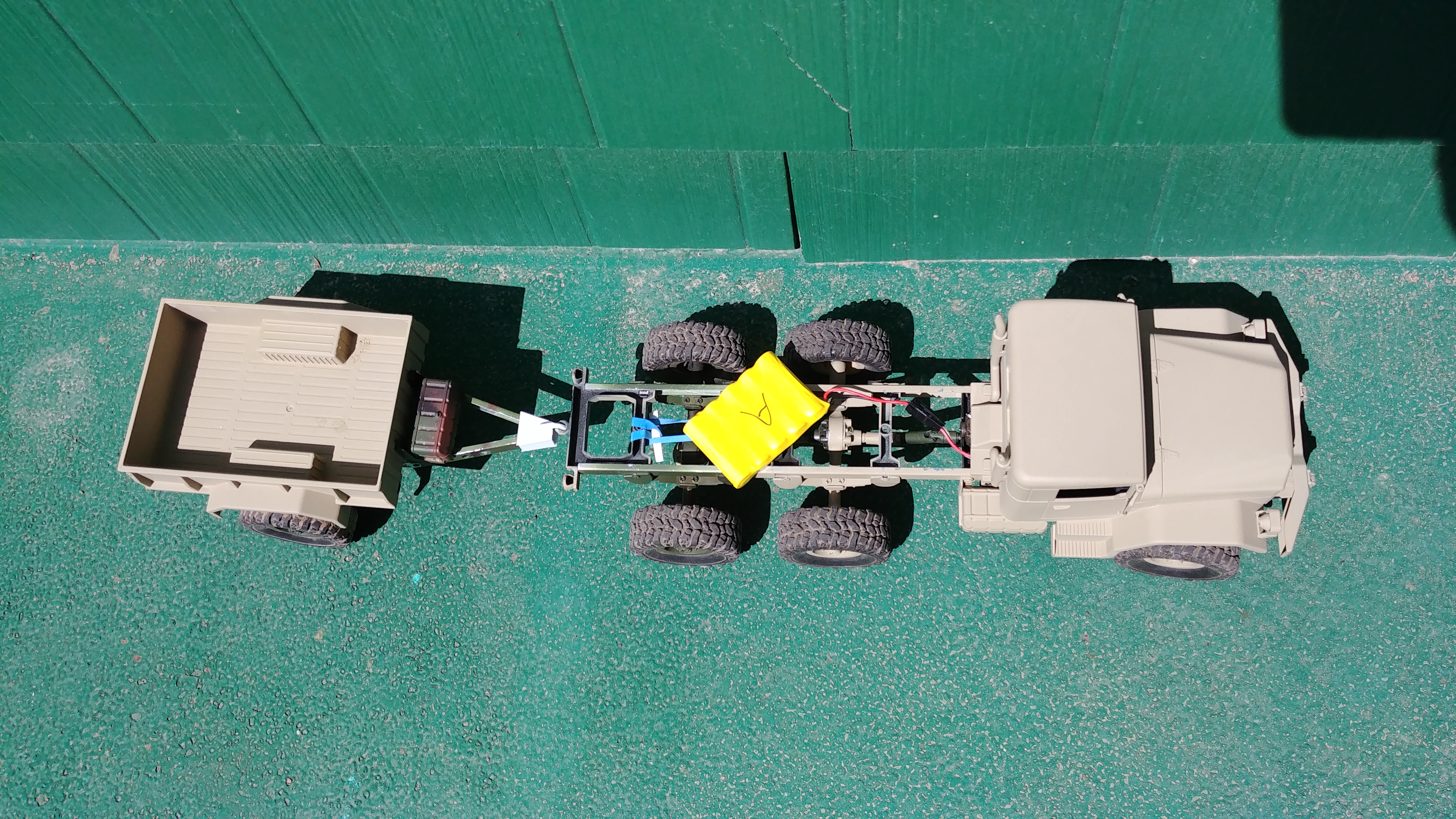 An enclosed bed was added sprouting antennas to make the truck a “Communications” truck with the idea of putting a target circuit in the truck to make it something for the tanks to shoot IR at. 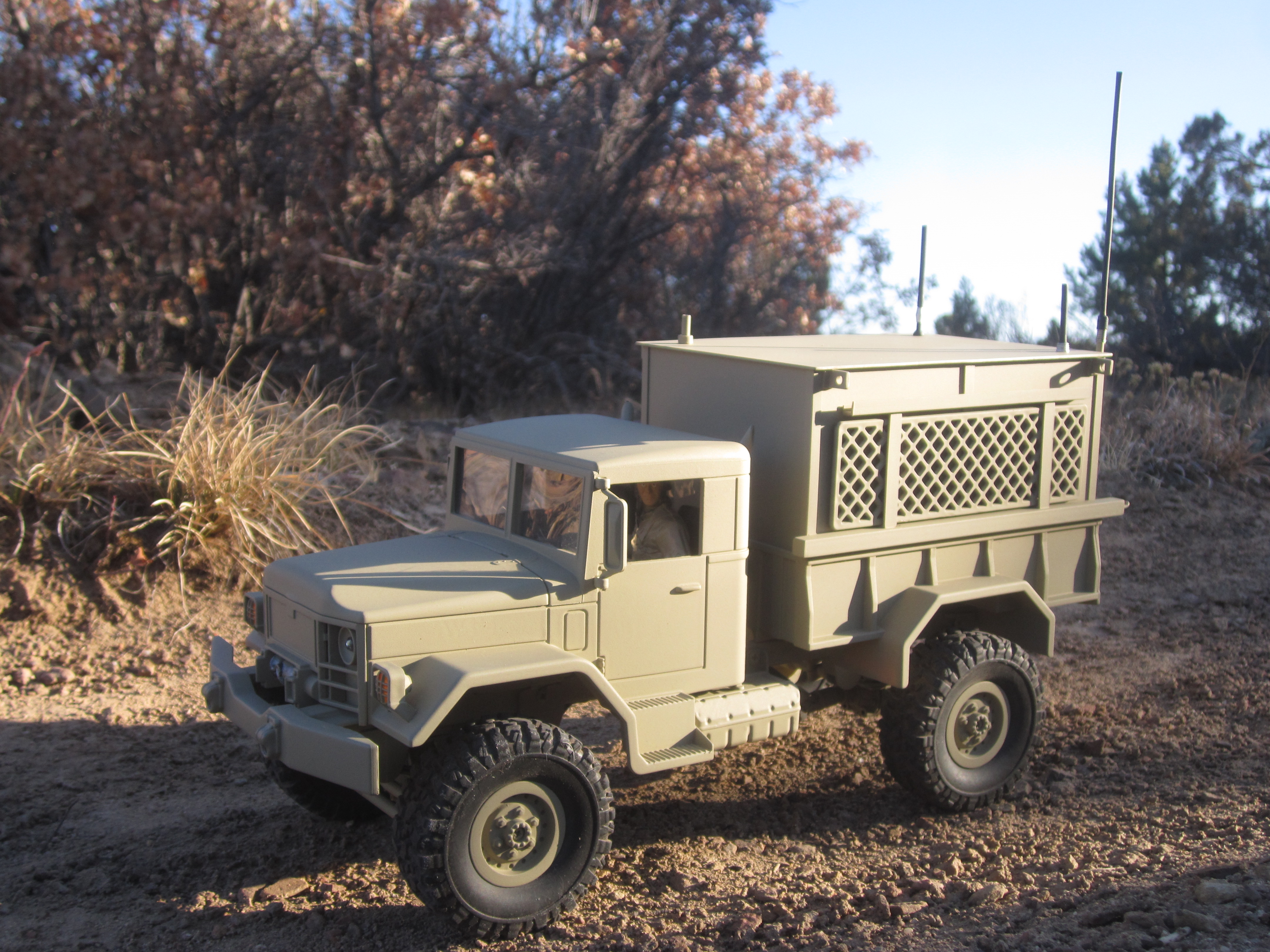 A Heng Long “apple” is being modified to fit on the roof of the truck’s load out so it will take hits.  For this road test in TANKLAND, the “apple” was not installed. 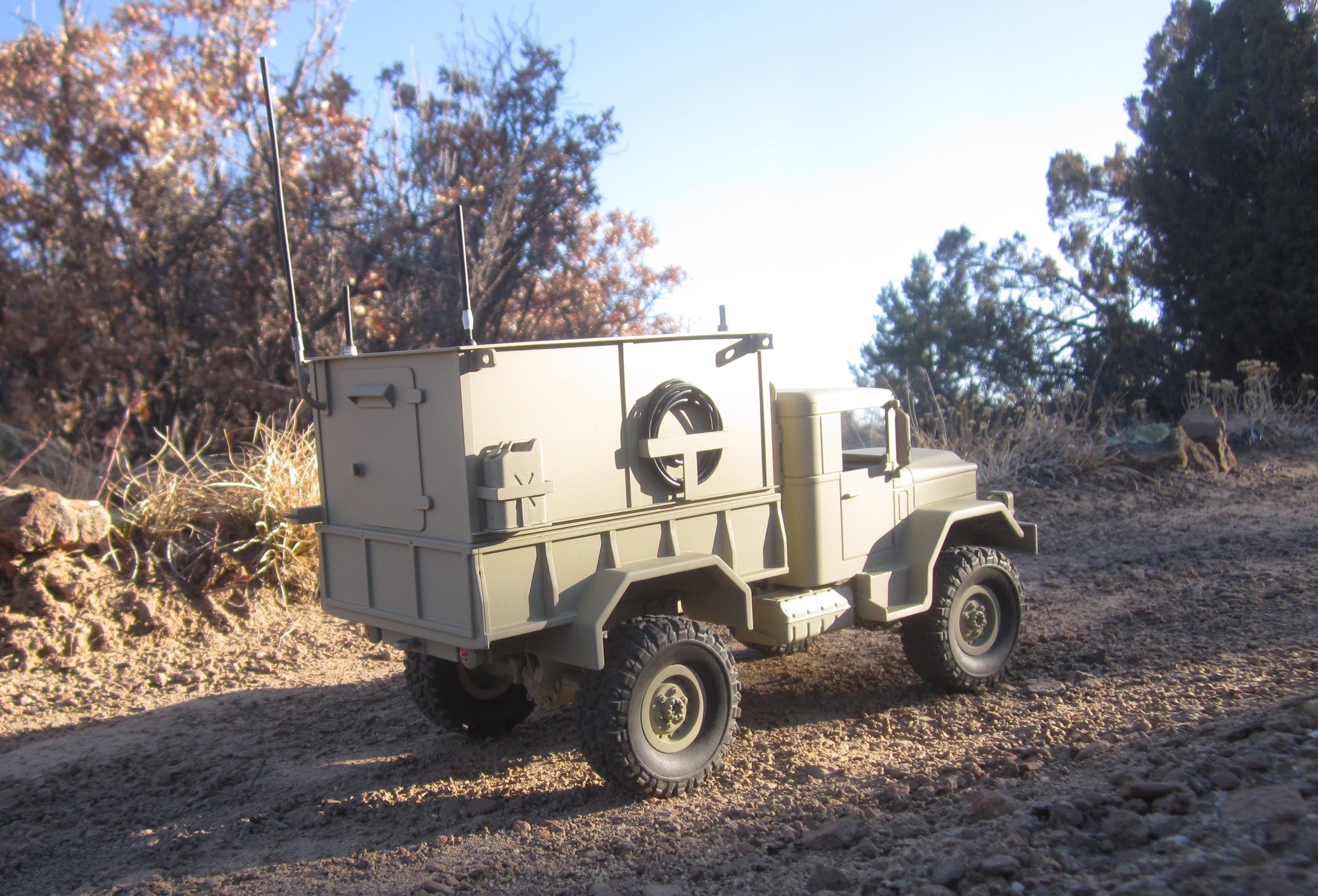 It looks good in  TANKLAND, but we wish it was a 6X6.  The Russian GAZ 66 will get a bed load something like this one has. 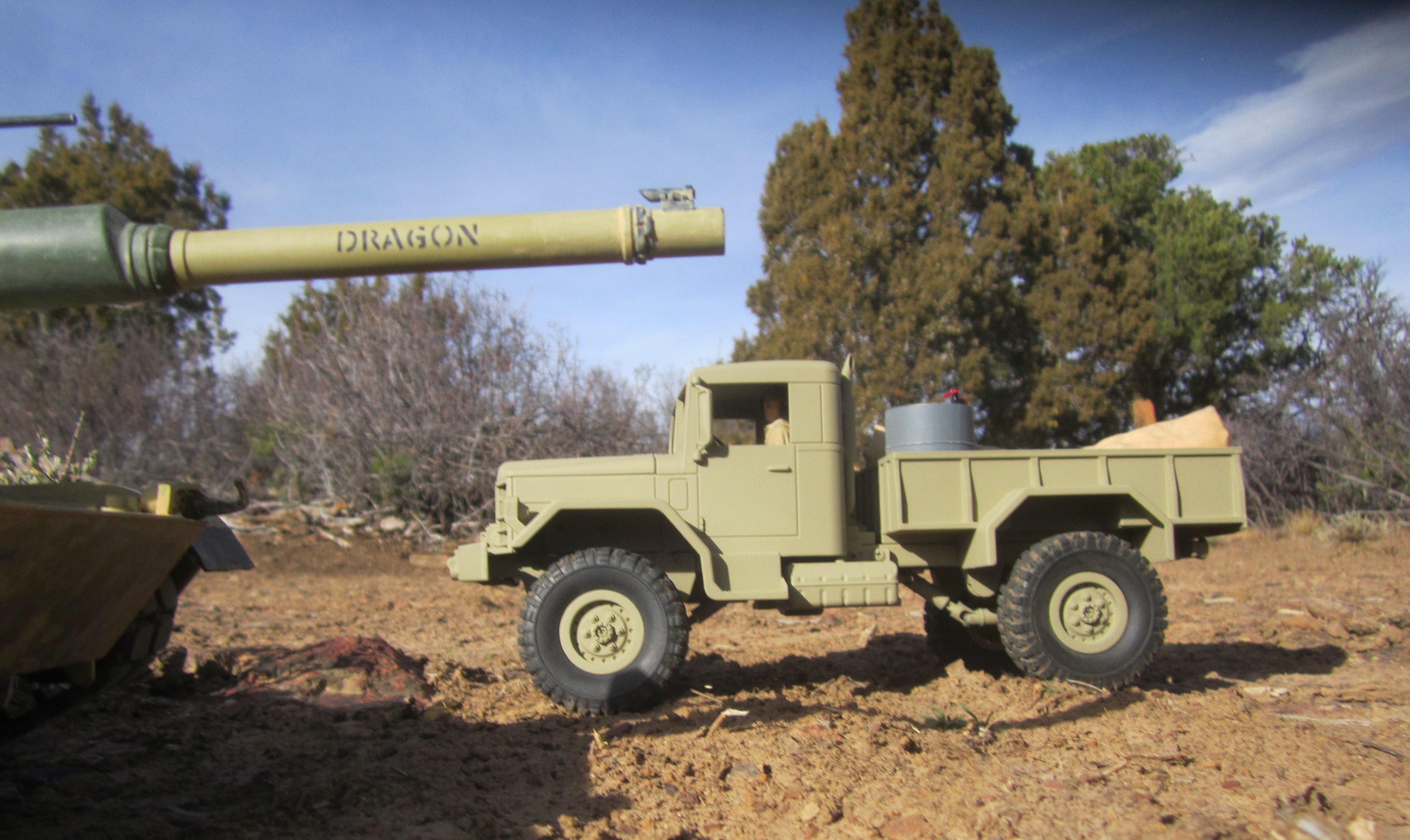 We got one green one, and one tan one, then tested them both in Tankland for off-road and on road performance.  The tan one’s transmission failed before the first battery was depleted, but the green one ran just fine.

Both did well in the off and on road tests.  They fit through narrow places that a tank cannot follow, and are quick over rough terrain, so they could be a good challenge for a tank to hit with it’s IR in a battle.

Both have now been painted, and will get limited detailing. Both trucks have drivers that are not period correct, but then, the trucks are not correct, so for now they will do. 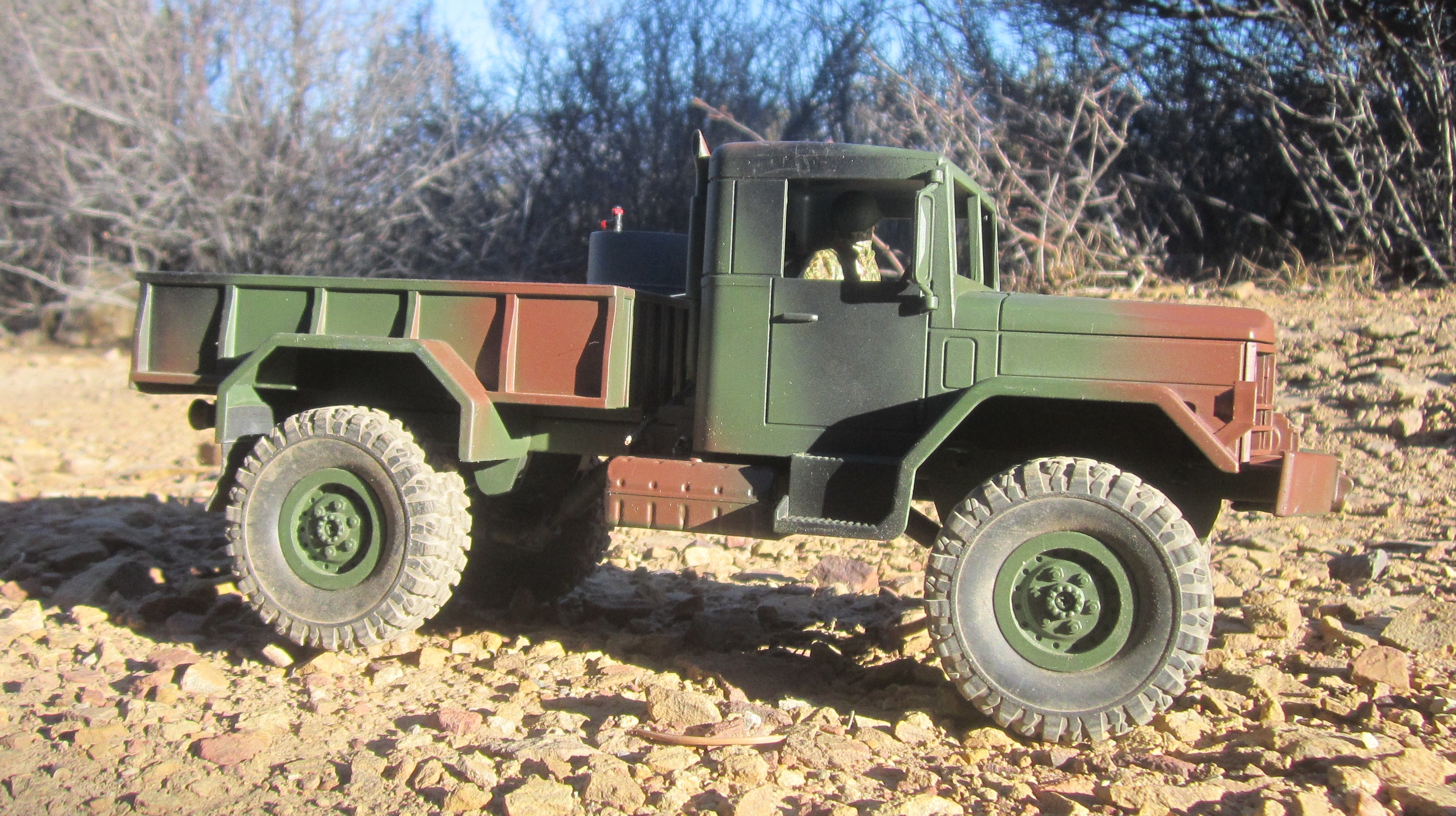 The WSD plans to acquire a Russian GAZ 66 4X4, and detail it out more to use as the actual IR target / fighter.  If and when the USA 6X6 comes out, WSD will get two or more of those to support the Abrams tanks.

All in all, a fun toy that can be fixed up and used as a base to kitbash lots of fun stuff.  We are currently researching putting a mainstream rock crawler guts under the GAZ 66 cab, and running it with an IBU3 to hunt tanks…

The WSD acquired a Heng Long 1/16 scale T-34/85.  It’s done up in winter whitewash camo.  Preliminary testing has shown that it does very well in snow.  That could be a big advantage here in the Rockies, we have lots of snow.  It is currently a stock Airsoft tank, and will be used as a “trainer tank” to help train new tank drivers, but it could be converted into an IR battle tank in the future.

We named it “Ghost”.  There is a small flaw in the plastic of the turret that looks like a panzerfaust hit.  Whitewashed the day after the crew and tank survived the panzerfaust hit in a late fall battle, the loader who was painting the tank, named it Ghost. 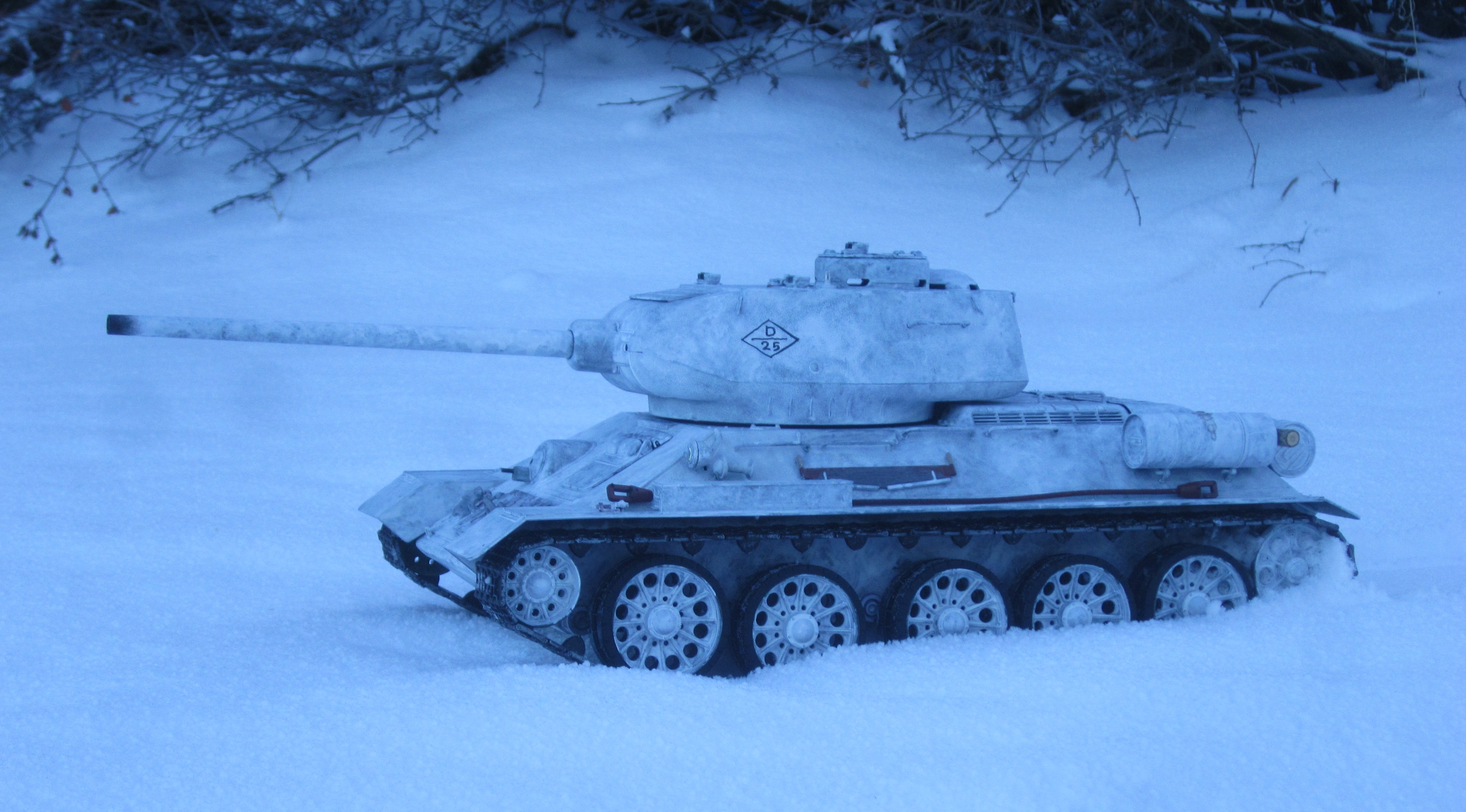